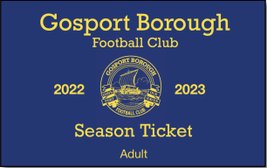 Memberships and Ticketing 1 of 4

The Club would like to go on record with their appreciation of
the level of support shown by its supporters, who have been
magnificent throughout the
21/22 season.

Season Ticket Sales and Game Attendances have been at an all time
high, which has helped the club's finances immeasurably......thank
you.

Whilst considering its options for next seasons ticket and gate
pricing structure, the club have been determined to recognise the
challenges that the current
cost of living price rises gives its community and fan base.
These same extraordinary cost rises across an array of basic
facilities such as electricity, gas, water, fuel and other services
will hit the club hard and negatively impact on its
operational budgets.
However in spite of these economic factors, the Club can announce that the majority of game pricing will remain the same as the prices charged for the season before last in
20/21.

Therefore - Season Tickets
The prices for the coming 22/23 season are:

The Club would also like to offer its fans the opportunity to spread
the cost of a season ticket with a monthly direct debit
option.
Monthly payment schemes will need to commence before the end of June, with season
tickets being issued in August prior to the opening game.

New Season Tickets will have a QR CODE on the reverse of the season ticket card, which will need to be scanned at the turnstile.

In order to continue to support the clubs licensing obligations, the
club are asking all fans who would like to use the clubhouse bar to
become Club Members, paying a one off annual fee of just £2.

In addition the club has decided to continue to offer fans the
opportunity to receive 10% of all ‘Food & Drink’ prices in the BORO’
bar and Trappers, by becoming
‘Full Discount Members’ paying a one off annual cost of just £30.

Club and Full Discount Bar Memberships are available to be purchased
from the 1st May and will run until the end of April 2023, so early
birds can enjoy the discount benefits throughout the summer and close
season.

Season Tickets for the coming 2022/23 season can be purchased by paying in one full payment using the following link….Click here

Season Tickets can also be purchased in person, by visiting the stadium during the following times - Mon/Weds/Thurs mornings between 11am and 13:30.