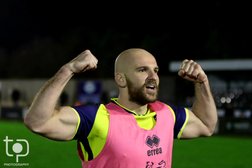 Gale wishes the departing Mike Carter well and says there's exciting things to come as plans are being made for next season.

Following the announcement that Carter has signed for AFC Totton, Gale has wished his former captain well and despite attempts to get him to re-sign, says the midfielder was keen for a 'new challenge'.

"I wish him all the best in his next chapter and he's a great lad, Carts. It's a shame. You don't want to lose your better players or your captain; but that's football and life goes on."

"We had a conversation and I asked him to stay but he felt he needed a new challenge in his career. He's probably had a difficult two years in respect of injuries and I get it. He's been a great servant. He's worked under me when I was assistant at Havant and obviously at Gosport, too. He's a great lad and I wish him all the best and thank him for all his services for us."

Despite last season's club captain departing, Gale doesn't believe it will leave a void of leadership in a dressing room where plenty of senior players have deputised in Carter's absence last season.

"We've got plenty of skippers and people have stepped up when needed. Ryan Woodford was the usual to step in but even when he was out we've had Dan Wooden, Rory Williams - we've got leaders at our club. Matt Briggs, Matt Paterson, they're all leaders these people. We'll make a decision on that (captaincy). Ryan Woodford's always been the natural one when Carts (Mike Carter) wasn't there so I don't really see a need to move too far away from that."

And though nothing has been announced yet, plans for next season are well under way with a number of re-signings and new signings set to be announced as we approach the June 1st registration window opening.

"There's people in the pipeline. Negotiations with other players are going well. We haven't released our signings yet but I will do. A good number of the squad from last season have agreed to stay on. There will be a few new players and hopefully we'll be getting our signings out soon."

"For us and for me, it's building time ready for next season, on what was a very productive and good season last year. Unfortunately we didn't reach our goal but we'll be working hard to add to our very good group of players we've got. A bit more quality and bit more experience maybe, even a few more young lads. A few more additions and we won't be too far away."